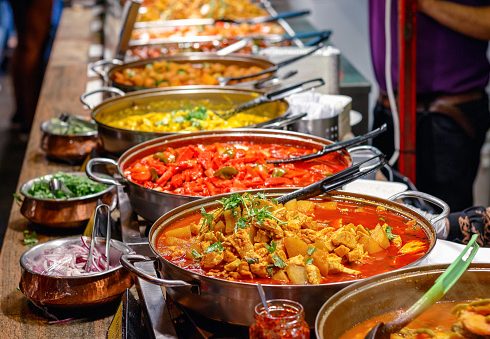 The story began 5,000 years ago and is still evolving. Indian cuisine is like a cosmic chaos and is difficult to define in one word or style as it is very rich and versatile, just like it’s demography. The most popular dishes outside of India are known to be butter chicken, tandoori chicken, rogan josh, dal makhani and more. These are all the north Indian cuisines, then comes south Indian, east Indian and west Indian cuisines. From there, the famous diversification starts with coastal cuisine like Goan, Konkani, Bengali, Odissi, Gujarati, Punjabi, Kerala, Kashmiri and many others. Next is Biriyani, of which  there are several types, with Lucknawi, Hyderabadi, Kolkatan and Malabari among others. The world learned to relish vegetarian and vegan food from India as almost 30% to 40% of the Indian population is vegetarian due to various reasons. IRAJ endeavors to make you aware of this variety of Indian food through various projects and events and create awareness of the health benefits of Indian food.
Spices play a vital role in the way food is cooked and consumed in India. Today Indian curries are relished all over the world owing to the rich and spicy flavors. Every spice has its own character & significance. Indian spices not only make the food flavorful, but Indian spices health benefits have been studied by researchers across the world with laudable results.
For example, golden latte or turmeric milk has taken the world by storm, especially as a super immunity booster. Fortunately, in India, we have been having turmeric since childhood, as it is an essential part of Indian cuisine. Indian spices benefits of cumin seeds, cardamom and cinnamon are also well known around the world.

IRAJ is a non-profit association of Indian restaurant owners in Japan formally established in 2020. Stalwarts and entrepreneurs of Indian origin from this fast-growing industry in Japan decided to join hands on the backdrop of the COVID-19 pandemic, agreeing on working toward their vision and mission statements.
Please look for the IRAJ STICKER and LOGO that indicates a restaurant is an AUTHENTIC INDIAN RESTAURANT.